Earth~Chan is the personified anime version of Earth. For two millennia little people called humans have lived in Earth~Chan's hair. In the span of that two millennia, the humans have developed technology that has aided in their survival but at the cost of polluting her body, which has caused her to become gravely ill and is slowly dying. She is best friends with Moon~Chan, and other Planets.

Earth~Chan is cute and silly. She is a caring person and loves the humans with all her heart despite the illness they've inflicted upon her. However, if you call her flat she'll become flustered and mad. 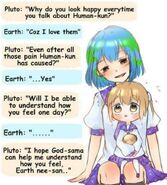 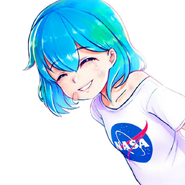 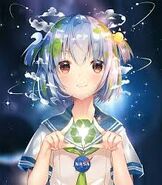 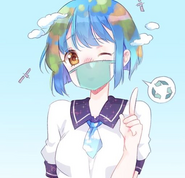 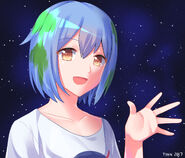 Earth-chan by tsuyohina (also used as a cover for "Earth-chan and Friends" book by Tamuna Tsertsvadze)
Add a photo to this gallery
Retrieved from "https://somethingchans.fandom.com/wiki/Earth%7EChan?oldid=946"
Community content is available under CC-BY-SA unless otherwise noted.